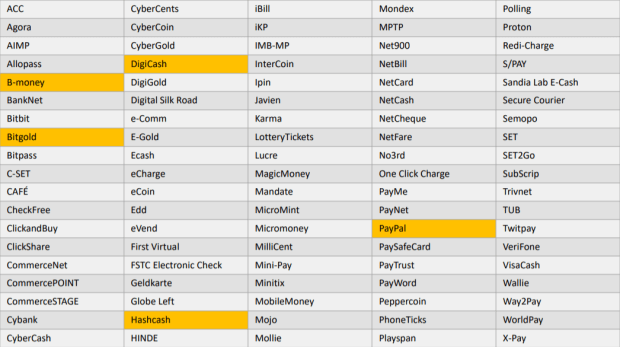 What Bitcoin Does That Changes The World

The History Of Bitcoin

In October of 2008, amidst a global recession resulting in government bailouts of the banking system, a white paper was released under the pseudonym Satoshi Nakamoto titled Bitcoin: A Peer-to-Peer Electronic Cash System. The paper summarized a confluence of technologies that, when combined, created the first successful form of digital money. These technologies were the product of 4 decades of attempts and failures to create digital money — below is a list of about 100 failed attempts:

PayPal is on that list — their original idea was cryptographic payments on hand-held devices. They were not able to execute on this idea, and survived by pivoting away from it. Many of the projects in the above table have a similar story of attempting to make something like bitcoin but coming up short. In hindsight we realize that their fundamental problem was that they tried to be a company in the first place. However, with each failure knowledge was gained, and the world came one step closer to digital money.

Many attempts to create digital money were spawned by the cypherpunk movement which originated in the 1990s along with the growth of the internet. Cypherpunks believed the internet would become a government surveillance apparatus unless defensive technologies were created.

Before governments implemented national firewalls, before social media websites were selling our personal data, before the NSA’s PRISM program,l and before big tech was systematically censoring political movements, the cypherpunks were at work anticipating this new world. They were able to anticipate it because of their uncommon intersection of various kinds of knowledge — including cryptography, computer science, Austrian economics and libertarianism.

Cryptography enables digital encryption, which removes the power of sovereign influence over the internet. However, an autonomous form of digital money is also required to have an economy free from government control. Digital money enables an encrypted online economy to freely transfer value and thus to freely organize in the digital world.

Here is a summary of the major events that ultimately lead to the creation of Bitcoin:

To recap, digital signatures create a verifiable method of confirming an identity digitally without disclosing it. This digital signature, when incorporated in a blockchain data structure, creates a temporally linked, immutable record of data. These technologies could be used to counteract problems native to digital money. However, the supply of that digital money needed to be scarce, and this problem was solved using computationally intensive puzzles (via hash functions) to regulate supply.

However, none of these advancements had found a way to resolve disagreement between nodes on the recorded ledger. Bitcoin resolved these final challenges. This may not make complete sense yet, but it will, so if you are confused please keep reading.

Satoshi says he or she started coding Bitcoin around May 2007 and registered www.bitcoin.org in May 2008. In October 2008 he released the Bitcoin white paper and code. The Bitcoin network was up and running by the start of 2009. The first transaction was sent to Hal Finney and a community of cypherpunks began encouraging the use of bitcoin for peer-to-peer transactions.

The foresight of the cypherpunks is astonishing, and what they did took courage. Much of their quest to invent internet money was inspired by economists rooted in the Austrian school.

“I think that the Internet is going to be one of the major forces for reducing the role of government. The one thing that’s missing, but that will soon be developed, is a reliable e-cash, a method whereby on the Internet you can transfer funds from A to B, without A knowing B or B knowing A.”

In 2008 this vision began its journey toward reality. Satoshi created decentralized digital money while standing on the shoulders of giants.

The Bitcoin protocol allows you to send scarce money to anyone in the world. This ability sounds simple, but it is powerful. Call your bank right now and ask them to wire a significant amount of money to somebody in another country for you. Enjoy spending the next week trying to make that happen and subsequently getting tracked by the government. The ability to move large amounts of value within minutes over a digital network does not exist anywhere else.

You might ask, what about Paypal or Venmo or Cash App?

Let’s append “trustless” to my last statement: the ability to move large amounts of value within minutes over a trustless digital network is incredibly powerful. It is trustless because you don’t have to trust a third party. This is possible because it is a decentralized network which has no third party intermediaries and thus nobody can control it; more on this later.

In April 2020, $1.1 billion in bitcoin was moved in a transaction for a cost of 68 cents, and it was done in a matter of minutes. This was done cheaply and efficiently without the transactors having to play by anybody’s rules, tell a third party who they are, trust anyone with their information or give anyone control over it. No other payment system in the world can move that amount of value, for that price, in that amount of time, without oversight from a third party.

To understand how this is possible we need to get technical. I will keep this high level — you can check out my book for a more in-depth explanation .

Bitcoin uses hash functions (also called hashes) in a variety of ways throughout the protocol. In the simplest sense it allows us to produce one-way calculations — a calculation where if A*B=C you can only find A or B if you know them (e.g., if you have A and C you cannot divide them to find B).

In Bitcoin, your public key is C, A is your private key, and B is known by everybody.

One-way calculations work because they are dependent upon an unsolvable mathematical problem called the discrete log problem. In short, if you use finite field math over a field of an unfathomably large prime number then dividing for the solution is practically impossible. Much of modern cryptography rests on this unsolvable problem. If it is solved, most of our cryptographic systems will crumble. Computers could theoretically become fast enough to guess solutions through iteration (e.g., through quantum computing). However, this is very unlikely. To give you some perspective on this, the prime number used by bitcoin is 2256~ or 1077 digits long. The estimated number of atoms in the universe is 1080. A trillion computers doing a trillion computations every trillionth of a second for a trillion years is still less than 1056 computations.1

Hash functions and digital signatures are used to create the basis of Bitcoin. They enable the creation of Bitcoin addresses. An address is where people can send and receive bitcoin to and a digital signature allows you to publicly prove you know the private key that unlocks your address without revealing it. To do this, Bitcoin uses the Elliptic Curve Digital Signature Algorithm (ECDSA) and below is a description of how this all ties together.

At a high level here is how the ECDSA works:

In Bitcoin every transaction has an input and output. When you send bitcoin the input is how much is at your address, and the output is the amount you are sending to another address.

Bitcoin allows people to create transactions and if the transactions pass verification from other nodes they are aggregated into blocks. These blocks are linked together to form a blockchain. The blockchain is used as a ledger that cannot be changed.

Each block has a block header that includes information for easy verification of blocks between nodes.

This data structure links everything together which allows computers to quickly verify that the history of the Bitcoin ledger is consistent between one another.

So, all transactions are linked within blocks through a tree structure and the previous block hash links all blocks together forming a blockchain. Below you can see a block header that includes all the fields shown above as well as the size of the block and all the transactions in it.

Any change in a previous block will be instantaneously reflected in the current block because the previous block hash would change. This structure was implemented to quickly allow participants to understand that they are both working off the same history of bitcoin transactions. This is basically a method of version control that protects against bad actors. A full explanation of this requires an understanding of the Bitcoin network, covered in the next essay.

Lastly, it is important to understand the memory pool. There is a period between the creation of a transaction and its ultimate recording in the blockchain. During this period, a transaction is held by every participant who has heard of it in their respective memory pool. This is like a waiting room where it sits until a miner has solved the computational puzzle that publishes the transactions to the blockchain. The memory pool can vary for each network participant. The memory pool of the miner who ultimately found the next block is the one that will be inserted in the block chain; any transactions that were sent but not included by this miner will simply have to wait to be included in the next block.

Eric Yakes came from the private equity industry and is a CFA charterholder turned bitcoin pleb and author of The 7th Property: Bitcoin and the Monetary Revolution – a comprehensive/technical resource on money, banking and bitcoin. He is passionate about enabling the Bitcoin ecosystem through financial services — if you have similar interests send him a DM @ericyakes.

This is a guest post by Eric Yakes. Opinions expressed are entirely their own and do not necessarily reflect those of BTC Inc or Bitcoin Magazine.

Bitcoin – The Open Money And Its Enemies