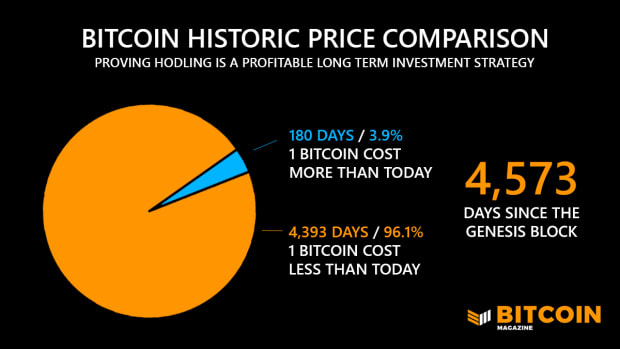 Bitcoin Has Been Profitable For 96% Of Its Life

Last Week In Bitcoin is a series discussing the events of the previous week that occurred in the Bitcoin industry, covering all the important news and analysis.

As more and more institutional investors jump aboard and more countries signal their intent to pursue bitcoin as an alternate investment to the US dollar or even their own currencies, bitcoin should be over the moon. Instead “jelly hands” continue to sell while the whales and sharks continue to accumulate. This week I decided to look at the profitability of owning bitcoin over the last twelve years.

Highlights from the Week

Chart Of The Week

The chart above is relatively simple. It compares the daily price of bitcoin since the genesis block was mined on January 3, 2009 until today, taking into account an average price of $34,000 per bitcoin. Essentially, the price per bitcoin was below $34,000 for 4,393 days out of the 4,573 days since the first bitcoin was mined. That means there have only been 180 days, or 3.9% of Bitcoin’s total existence, when it has been priced higher. Only people who bought during one of those 180 days are running at a loss.

I created this chart with one thing in mind: showing the importance of hodling and how bitcoin is a profitable investment, in both the long and short term. Those who sell at the first red candle are commonly referred to as “jelly hands,” selling at a loss fearing the price will fall further. However, as has happened a lot over the last 12 years, if you hold on long enough, your bags will be worth more than what you paid — much, much more in most cases.

Eye-watering short term gains introduced many to the crypto market before research and understanding led most of us to understand how Bitcoin ensures both financial freedom and financial security for all. Much like greed fuels the growth in price, fear fuels the dump thereafter. So, your portfolio is down 5% or 10% or even 50%; what do you do?

It’s simple: HODL. Yes, it is particularly difficult to hold, especially if you’re one of the many that bought bitcoin above $60,000. But, as I have mentioned before, I believe bitcoin is overdue for a decent pump over the next few months. It will very likely surpass its last all-time highs and I predict that those who bought high will feel a little bit of redemption for remaining committed to holding.

As the price regains momentum, the 3.9% of the time when buying bitcoin has not been profitable will become a smaller and smaller proportion until new highs are hit. Or, you could sell and hope for a lower buy in and end up like those who sold their bitcoin at $100 expecting a dump, only to see the opposite happen. It’s “hold on for dear life” not “panic sell and regret for the next decade.”

Will I ever cover recent bullish news that doesn’t somehow circle back to El Salvador? Perhaps, but it won’t be this week. Last week, politicians from Paraguay signaled their intent to submit a Bitcoin bill in parliament in the week ahead. What does that mean? Well, it’s possible that yet another Central American country may end up adopting bitcoin as legal tender, or at least as an official investment vehicle.

Following the previous “Last Week In Bitcoin” piece focusing heavily on bitcoin mining, this last week has seen more positive moves in the mining community. Gryphon is expanding their mining operation with 7,200 new mining rigs and one of the oldest hydro-electric power stations in the US is being used to mine bitcoin. Add to that more and more miners are slowly going back online after the Chinese bitcoin mining exodus and the drop in mining difficulty, then it’s easy to remain bullish on mining, the cornerstone of the market.

Finally, SelfWealth, an Australian brokerage, will bring the ability to invest in bitcoin to its over 95,000 investors, paving the way for more adoption and likely acting as a catalyst for other firms to follow in their footsteps. Bitcoin is spreading like a wildfire. Eventually all the bullish news from the last eight weeks or so will get priced in and the sea of green candles will be pure bliss.

In a cruel twist of irony, or is it “Iran-y,” Iran announced plans to push through laws that would promote bitcoin mining in the country, however, they currently still maintain a ban against trading and investing in bitcoin mined outside of Iran. What the government is thinking remains unclear since they clearly see the value in mining bitcoin but still see it as a threat to financial control over the masses.

So, dictatorships are still bad. Nothing new there and for now there appears to be very little bearish news.

It’s been a mantra ever since the term was first coined in 2013: HODL. Holding on through thick and thin is sound investment advice, if we’re talking about bitcoin, that is. If it’s Tesla shares, then perhaps you should reconsider before it’s too late. But bitcoin is at a decent price to stack some more. Sometimes looking back at past performance is a surefire way to predict what is to come and I believe this time is no different. Bitcoin has been a solid investment vehicle for many individuals over many years and that won’t change anytime soon.

If you bought high, HODL on and learn where the term “diamond hands” comes from. If you bought low and are still seeing gains, there’s no reason to stop HODLing now…

This is a guest post by Dion Guillaume. Opinions expressed are entirely their own and do not necessarily reflect those of BTC Inc. or Bitcoin Magazine.

The Fundamentals Of How Bitcoin Works