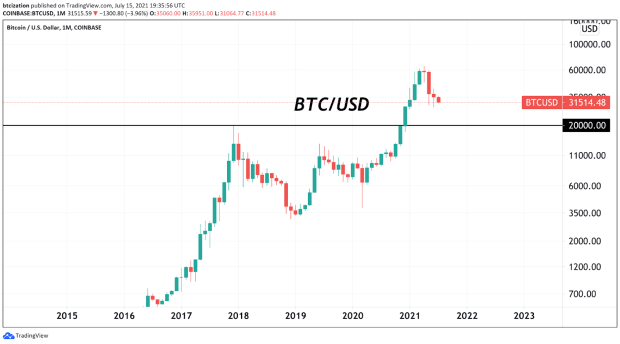 A “Digital Dollar” Doesn’t Fix This

The below is an excerpt from a recent edition of the Deep Dive, Bitcoin Magazine‘s premium markets newsletter. To be among the first to receive these insights and other on-chain bitcoin market analysis straight to your inbox, subscribe now.

During a testimony yesterday afternoon in front of the U.S. Financial Services Committee, Federal Reserve Chairman Jerome Powell commented on the impending central bank digital currency (CBDC) to be launched by the Fed, and how in his mind it would compete with other “cryptocurrencies” and “stablecoins.”

The fact of the matter is that the difference between a central bank issued currency and bitcoin in particular is not a technical one (albeit there is, or rather will be, many different technical aspects), but rather a one of governance.

A “digital dollar” is not all that different from a so-called “analog” dollar today, except the fact that it will probably include less privacy assurances, more censorship and more direct control over supply and monetary issuance.

Bitcoin is valuable because no one can change or manipulate the hard cap of 21,000,000 or the supply issuance. Bitcoin as a monetary asset is uncensorable, unseizable and unable to be manipulated. Anybody can run a node and audit the entire monetary supply with a cheap computer.

Contrast this with what the digital dollar would come with:

In “crypto” that is what is known as a “sh*tcoin.” The fact of the matter is that the U.S. dollar is a far inferior monetary asset than bitcoin, and pricing bitcoin in other denominations shows exactly this.

Below is the chart of BTC/USD over the course of the last five years.

But what if instead of pricing bitcoin in dollars, you use the M2 money supply as a denomination? The problem with pricing any asset in dollars over the long run is that the actual value of a dollar is malleable due to the perpetual supply inflation.

When the assumption that the dollar as a unit of measurement is fixed in value over time, the chart begins to tell a different story. Adjusted for M2 Money Stock, the price of bitcoin has already retested the 2017 all-time high. It is important to remember that not only is bitcoin accruing value during its monetization phase, but simultaneously the value is debasing in perpetuity.

Is Nuclear Power The Future Of Bitcoin Mining?

The Dollar Has Been Inflating Against Bitcoin Since 2011